FREE SHIPPING on orders over $49!

Books – particularly textbooks - are almost equally as important to some students and classrooms as teachers are. Despite this, rising textbook costs and alternate study opportunities have caused some students and schools to postpone or forego purchasing physical copies of books entirely.

According to research, the average cost-per-student for textbooks and other books used within a classroom is $400. As a result, many institutions and students in the digital age have turned to eBooks to save money.

Ebooks are similar to traditional books, but they are available in a digital version. You may need to connect to the internet to access your digital textbook, depending on the type of digital textbook you purchased. Alternatively, you may be able to download the content on your device for use indefinitely.

What Impact Do E-Books Have on Students?

Reading is a critical skill. Therefore, we should accept and value the way young people read, whether it's by turning pages or swiping screens.

International and national studies have long demonstrated the favorable influence of leisure reading on young people's learning as well as their future employment chances. And, of course, young people's comfort with and familiarity with technology is also well known.

Electronic devices like smartphones and tablets are now widely available and owned by people from all walks of life. In the recent past, around 75 percent of children aged between five and 15 had a tablet in their home, and 69 percent of 12- to 15-year-olds owned a smartphone. So, how can we make technology work for us in the classroom?

According to a survey, children aged eight to eighteen said they read more on electronic devices than on paper, proving the importance of technology in young people's literacy lives. While much of a young person's screen time is spent chatting, watching films, playing games, or watching videos of other people playing games, they can also read eBooks through their access to portable electronic devices.

Should schools provide students with both electronic and physical books? There is minimal agreement among published studies on the impact of eBooks on young people's reading motivation and ability. However, a recent study examining the impact of an eBook platform on students' reading abilities and motivation discovered that access to eBooks improved students' reading, particularly for boys who started the study with the lowest levels of reading participation.

The Concept of Enjoyment

According to data collected from schools, employing technology to read could be a particularly effective strategy for enhancing boys' reading motivation. Boys' reading levels improved by 8.4 months on average throughout the course of the project, while girls' reading levels improved by 7.2 months on average. Boys' attitude improvements were also more evident: at the end of the project, twice as many boys thought reading was “hip”, and the number who thought reading was “tough” was nearly halved. Not only did the percentage of boys who enjoyed reading on-screen grow, but also the percentage of those who started with the lowest levels of reading enjoyment. In fact, it quadrupled over the course of the experiment, implying that the ability to read eBooks may have opened up a new world of reading for some students. The findings also imply that using technology to help children read for pleasure could be another effective tool for schools looking to encourage all children to read for pleasure, particularly those who do not enjoy reading on paper.

There are several convincing case studies that show how eBooks have been successfully used to entice reluctant readers of all genders to attempt reading. Teachers and librarians have praised the advantages for both novices and experienced readers. However, it's vital to keep expectations in check - a screen won't turn a reluctant reader into a bookworm overnight, and a sizable minority of young people prefer to read on paper or don't care.

The Importance of Convenience Cannot Be Overstated

Convenience is the key! Young people spend a lot of time outside of school on their devices, so giving them the option to read via their technology is a good idea. Many school-oriented eBook platforms may be accessible both online and offline via an app, allowing students to “borrow"' from the school's digital library and read wherever they are, whenever they want. Some school librarians have also discovered some unexpected advantages to including some eBooks in the library. For example, in libraries with limited space, eBooks allow the library to expand beyond its physical shelf capacity; they also eliminate the need to track down returns of hard copies of a book—an eBook’s loan period ends automatically—and digital titles are not subject to physical wear and tear. More crucially, by renting eBooks for short periods of time, such as a term or two, librarians may arrange future rentals to reflect recent popularity, allowing them to spend their budget more efficiently and build a library that is increasingly tailored to their students' needs and interests.

If a school is considering launching a new digital library, it's critical to do comprehensive research on suppliers and keep in mind that Internet and hardware access, staff capacity and technological confidence will all play a role in its success. It is also critical to involve students in the selection of their eBooks. Having a say in what you read, just as with printed books, is a powerful motivator for children of all ages. And and we are fortunate that most titles are now available in electronic form.

So, how have eBooks influenced literacy? There has yet to be a definitive response. The influence of e-books on literacy appears to be favorable on many levels as access to these devices and the Internet has increased. Children have said that they prefer to read on a computer screen. According to a study, 52 percent of children prefer reading an e-book while only 32 percent prefer paper. The fact that e-book titles are now outselling traditional paperbacks certainly demonstrates these shifting tastes.

E-books appear to benefit not only school-aged children but also adults in strengthening their literacy skills. Because of its technological aspect, reading digital texts appeal to a growing segment of the population. While there yet to be conclusive evidence of the effectiveness of e-books, studies reveal that today's children are increasingly relying on them, making them a critical resource in your classroom and school 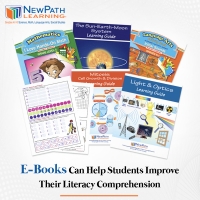